Fryeburg is a rural community of about 3,400 residents, located on the border of New Hampshire with the towns of Conway and Chatham as neighboring New Hampshire towns.  The Maine bordering towns are Brownfield, Denmark, Bridgton, Sweden, Lovell, and Stow.  It is at the junction of two major routes from Portland which merge to continue west to New Hampshire and northwest through the White Mountains to Vermont and Canada.  The roads follow original trails used by Indian tribes.  Later the roads were improved for settlers’ stage coaches, railroads, and now highway routes 302, 5, and 113 used by motor vehicles. 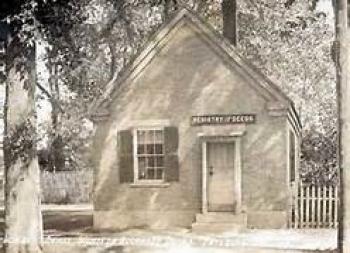 Fryeburg lies in the broad intervals of the Saco River and adjacent upland areas covering about 60 square miles with additional land granted after the original 36 square miles.  The Saco River made a great bend north, winding about 70 miles through the township.  The river was shortened to 34 miles by the building of a canal in 1817.  The Saco River is a benevolent source of fertile farm lands and recreational pleasures.  It is also the cause of great damages during the spring floods which can damage crop lands, roads, bridges, and homes.  The floods of the last 70 years in 1923, 1936, and 1953 caused extensive damages as did the most recent flood in 1987.  The lower areas of Fryeburg are about 400-430 feet above sea level with some of its hills rising another 600-740 feet higher.

Spectacular views are present from many vantage points, including views of the Ossipee Mountains, Mt. Chocorua, and most of the eastern White Mountains.  Evans Notch lies to the north, Pleasant Mountain to the east.  Within the town are Mount Tom, Starks Hill, Pine Hill with Bradley Park, and in Peary Park are Admiral Peary’s True North Meridians.  Also, there is the well-known glacial granite outcropping “Jockey Cap” with its Peary Memorial view-finding bronze director which shows the outline and old Indian names of the mountains and lakes visible from atop Jockey Cap.  There is one covered bridge.  It is Hemlock Bridge, which is over a section of the Old Saco River in East Fryeburg.

The Pequawket Indian Tribe of the Abanaki Nation occupied the village and Lovewell’s Pond areas for generations before settlers arrived.

The Pond is famous for a battle on May 8, 1725, between 34 rangers from Dunstable, Massachusetts, against Indians who had attacked various settlements.  The rangers were led by Captain John Lovewell, the Indians by Chief Paugus.  It was a day-long fight at the north end of Lovewell’s Pond with disastrous results.  Both leaders and many of their men were killed or wounded in the battle.  A monument to commemorate this battle is located at the north end of Lovewell’s Pond on Island Road, near Battleground Road.

Fryeburg was the first town settled in Oxford County.  It was given to Colonel Joseph Frye of Andover, Massachusetts, as a British Royal Grant by the General Court of Massachusetts.  The town was given in recognition of Colonel Frye’s services in the French and Indian Wars.

The original grant of 1762 was for 6 miles square in a general area chosen by Colonel Frye.  Colonel Frye chose the best of the Saco River and the fertile interval land.

Frye laid out seven, forty-acre house lots on the plains and in the part of the township nearest the Province Line, which became the general boundaries at the present Fryeburg Village.  Some of these old granite markers can still be found.  Other less densely populated localities became known as Fryeburg Center, West Fryeburg, North Fryeburg, Fryeburg Harbor, East Fryeburg, and the Haley Neighborhood.

The town was incorporated on January 11, 1777, with a government of a “Board of Selectmen and official” elected by town meeting voting.

The early settlers came from Northern Massachusetts towns as did Colonel Frye, and from the Concord, New Hampshire, area.  Many of the settlers were of British descent and college educated.

Fryeburg Academy was incorporated in 1792 and has provided a secondary education for students from Fryeburg and surrounding towns as well as boarding students ever since.  Daniel Webster was the Preceptor of the Academy in 1802.  The elementary schools and Academy provide numerous social, cultural, and recreational activities for the community,

From the beginning, a good percentage of the young people have been college educated and have pursued vocations in various areas.

The town’s population grew slowly and the town retained its rural character.  In the first 100 years, transportation was difficult so the social life revolved around the homes, churches, schools, and fraternal orders. 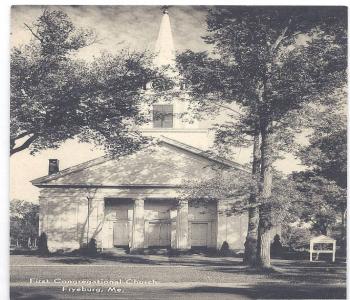 The Congregational Church was organized on October 11, 1775.  As the church split, other churches were organized.  Now, there are Congregational, Methodist, Universalist, Christian Science, Assembly of God, and Roman Catholic churches.  Each church has groups which develop social activities.

Additionally, the two children’s summer camps, Indian Acres Camp For Boys and Forest Acres Camp For Girls, provide 150 openings each for summer camp sessions for children ages 6-17.  Children from across the country and even across the world attend camp.  Historically there were numerous summer camps in Fryeburg. Indian Acres and Forest Acres, which originated in 1924, remain active and thriving today.  These camps take advantage of the Saco River, Lovewell Pond, and the nearby mountains, along with their own extensive facilities to provide recreational and educational opportunities for the campers. The benefits of having these summer camps in multi-faceted to the Town.

The village has a historic district of fine old homes.  Many are on the National Register of Historic Places.  These include the Library and the Former Registry of Deed Building.  Many of these buildings are up to 200 years old.  The intervale and upland areas also have equally fine old homes.

The coming of the Mountain Division of the Portland and Ogdenburg Railroad (the predecessor of the Maine Central Railroad) in 1873 reduced stage coach travel.  This made transportation to Fryeburg and on to the White Mountains much faster and opened up a thriving resort business, and the growth of church camp meeting grounds in Fryeburg, of which some still exist.

There had been Public Houses for meals and sleep as a service to travelers from about 1800.  The first Oxford House was built in 1800.  It burned in 1887, opening the way for a new four-story 67 room hotel also named the Oxford House.  This Inn burned on August 31, 1906, along with 13 other important buildings and homes.

The town’s summer travel businesses never fully recovered from that disastrous fire.  With the coming of automobiles, vacationers became increasingly mobile and no longer settled into one town or hotel for the summer.

Today Fryeburg’s summer tourist business is mostly derived from thousands of people visiting the pristine waters of the Saco River for day and overnight canoe trips.  Other business is derived from people vacationing in camps and vacation homes primarily around the lakes and ponds.

Fryeburg is still an important link in the northern New England transportation network.  Through Fryeburg is a major trucking route from Portland via Routes 302 and 5/113 and from Auburn and Lewiston via Route 302 to all points northwest of town.

Fryeburg, with its rich history and beautiful location, and active community organizations is an almost picture-perfect small town.